How much ignorance is bliss? Well, at least for the folks at Airtel, there seems to be no bounds to their ignorance towards customers like you and me.  Or else, how do you explain their callous attitude and thousands (could be even millions) of disgruntled customers? In today’s day and age where everyone’s harping about better customer service and are going out of their way to entice the masses to consume their product/service, what makes Airtel believe that they can continue to provide a shoddy service and be oblivious to their customer’s plight? I’m not going to pretend that I’ll be able to answer these questions for you but I’ll try and show how Airtel could be the most despised, corrupt and scandalous network in the country. Before I delve into all of that, let me first share the ‘shit hit the roof’ moment for me, which eventually compelled me to write this post.

I have been using my latest Airtel prepaid connection for about 6 months now. I recently bought a new Blackberry phone and since Airtel was offering Blackberry services on prepaid connections as well, I didn’t see the need to switch to a postpaid connection. I activated the Monthly Enterprise-Mail Service plan on my phone between 12:00 AM – 1:00 AM on the 10th of Aug. I had called customer care multiple times between 12:00 AM – 1:30 AM to seek assistance for various issues pertaining to their IVR based activation mode.  At 1:34 AM, I got a message from Airtel saying that my request had been registered and that my plan would get activated soon. I called customer care again to find out how long it would be before I could start using the Blackberry services; I was also asked to wait for a max. of 24 Hrs by which time my plan would have gotten activated.

I waited till afternoon before I decided to give customer care a call again. I was passed onto innumerable people (I was asked to call different set of helplines as well) and none of the executives were able to give me an update on the activation status. It didn’t help that the executives that I spoke to were the most incompetent ones that I had ever come across (No offense guys, I blame the HR person who hired you to begin with) to say the least. At one point, I wasn’t able to get through to any of the helplines; as soon as I chose the option to speak to a customer care executive, the call got dropped. Some even pretended that my voice wasn’t going through and hung up!

Later in the evening, I was able to get through to customer care again. The executive informed me that my plan had gotten deactivated at the back-end, he didn’t know how or who did it. He told me that he could see on the system that the fee (Rs. 899) had got deducted from my balance and he assured me that he would make a mention of the same in the escalation to his supervisor.  He consumed time, giving me false assurances (all this while I was being charged 50p/min for these calls) and he promised me that this matter would get resolved within another 24 hours. I called back 24 hours later and surprise! surprise! a different  executive told me that the plan is still showing as deactivated! He then asked me the same set of questions the other guy had asked the day before; I gave him the same set of answers. He apologized profusely and told me that he was helpless and that the only thing he could do was to escalate it to his supervisor, which he did immediately. I asked him what I was supposed to do if it still doesn’t get activated in the next 24 hours and he told me I’ll have to call back again. This made me furious and I decided to draft a mail and send it to their so-called ‘customer service’ arm – Airtel Presence; no response. Earlier today, I went onto their Facebook page and enquired if somebody was going to respond to my mail and well why was I not shocked when they responded by asking me if I had sent the mail to the right e-mail ID 😉 How many more calls do I need to make to get this issue resolved? How much more money should I spend on making phone calls to their customer care before I can actually start using a service which I already paid for (please note that the fee was deducted in less than 5 mins after I sent a message to get the plan activated)? 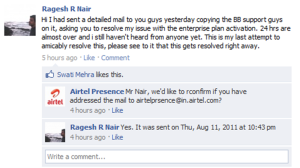 This wasn’t the first harrowing experience that I had with Airtel and if I begin sharing them here, this’ll turnout to be an endless saga (as if it isn’t already ;)).

Let me go back to the imperative questions which I had asked at the beginning of this post. Before I try answering them, let’s look at some facts which make Airtel the leading cellphone network provider –

The figures above makes you wonder, doesn’t it? About what makes Airtel more successful than its competitors, despite having numerous bereft customers? The answer is not that simple to deduce but a lot of it had to do with the ‘First-mover advantage’ and Airtel’s innovative marketing strategies.  But the tide is shifting now and Airtel is gradually losing its market share to more efficient players on the scene. Airtel has reported a consecutive net profit decline for the past six quarters due to higher cost of operations, interest expenses and loss from their African business. They have increased their tariffs by 20% in order to halt the decline in key operating margins (Source: Fullerton Securities). Airtel’s revenue market share also slipped 260 basis points from 32.7% to 30.1% in the just concluded quarter, since March 2009 (Source: DNA). Sanjay Kapoor, CEO (India & South Asia) said “All I can say is that we don’t know of many cases, where with hyper competition, the market leader hasn’t lost some share” when asked about declining market share (Source: MEDIANAMA). Airtel may not accept this and business analysts may sound iffy but that’s not going to save the company from its impending ouster from the throne, is it?

Why am I still with Airtel? Well, my previous phone was Airtel Blackberry locked and hence I had no choice but to stay with them. Now that I’ve a new phone and also thanks to TRAI, I now have the option of porting (MNP) my no. to another network! But Airtel needs to tidy up their act and restore the lost faith in the brand, for their own good. Listening is just one part of the story, acting on it is more important. For heaven’s sake, just look at the sheer volume of unsatisfied customers around! Google ‘Airtel Complaints’ and you’ll know what I’m talking about or just visit their Facebook page or Twitter handle. I wonder how many people they have managing their Airtel Presence accounts online, the only person I have seen responding to such grievances is a guy called Rakesh Sharma and all he does is ask people to send a mail to airtelpresence@in.airtel.com. I can’t help but also wonder what head honchos like Shruti Atal, Sunila Ahuja, Reetika Tandon and the likes do all day. If anyone from Airtel is listening, please take a cue from the Best Buy and Zappos case studies, or even better, just buy a copy of Empowered and gift it to all your senior management… No…seriously!

Eventually, what did I achieve from writing this post? I’m not sure but I managed to vent out my frustration (You could make that out from how my tone changed from the beginning of this post to this point),I realized that I don’t have to use Airtel anymore and I also managed to make a blog post out of it. I guess I did well. I know there are a lot of people out there like me who have had tormenting experiences while using Airtel’s services, please share them here and re- share this post if you think it may prove to be useful to someone you know. Thanks for reading!

3 thoughts on “Dear Airtel, I’m Breaking Up With You”