Much has been spoken about Facebook’s new UI changes in the past couple of weeks. Some are excited about the changes and then there are some who have been openly protesting against it and asking that Facebook rolls back the changes. Irrespective of which side you’re on, you must hand it to Zuckerberg and his crew for taking such a bold decision to overhaul what has been Facebook’s signature UI for seven years. 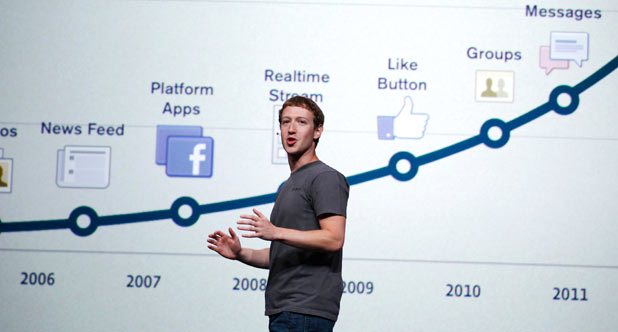 I for one am super-excited! Quite frankly, I had thought Facebook had reached its endgame. But I must say, I’m without question taken aback by the magnitude of changes that Facebook has brought about. The changes unveiled at the f8 conference in San Francisco, shows Facebook’s endeavor to become a scrapbook for people’s entire lives, from the time they were born to when they die (or for at least as long as they remain a Facebook user).  Facebook is in essence trying to create a virtual world where people are encouraged never to leave the social network. They can socialize with others, watch movies, stream music, play games, and maybe even meet their future partner. Facebook has also entered into various partnerships with media firms to transform Facebook into an entertainment hub, in which every song, photograph, movie and book you read is shared with everyone you know on the site. Facebook is also partnering with select publishers including Yahoo News and The Washington Post to allow users to read articles their friends recommend right on Facebook. It might all be too much for an average user to digest at one go, but surely they’ll get used to it over time. So what are these changes of gigantic proportions that we’re really talking about? Well, there’s plenty. Where do I start!

Let’s begin with the ‘Home’ page.

The ticker, located on the right-hand panel of the home page, allows users to see a stream of minor updates from the people in their network. These updates include stories like comments on posts, page likes, change in profile information etc. When someone clicks on a feed from the ticker, the feed pops-out in a mini window form, allowing the user to see the entire update. Interestingly, the ticker also resizes itself depending on the volume of feeds. Experts believe that Facebook has plans to open up the ticker to businesses for advertising.

Following suit with Google +’s circles, Facebook has introduced a feature called lists, which allows users to segment the people in their friend’s list. The work is cut out for the user since Facebook has already taken the liberty to put their friends into lists based on the information they’ve on their profile; however, the accuracy of this is debatable.

At first glance, the birthday reminder feature still looks the same but when the user clicks on it…Voila! A mini window pops open which allows the user to post birthday wishes to their friend’s wall without having to go into their profile. What’s more, they can post on multiple walls by doing a simple copy + paste.

Now users can see certain stories featured prominently at the top of their news feed. I’m not sure of the logic Facebook has used for this but it looks like posts with the most number of comments and likes are chosen to be displayed here. A user can also choose to mark certain stories as a top story and Facebook will then remember to feature similar stories under this section. A blue triangle shaped button at the top-left corner of a story enables the user to mark or unmark it as a top story.

Each story on the user’s feed has a drop-down arrow button at the top-right corner. Users can chose to receive only limited feed from certain people on their friend’s list.

Larger photo displays have jazzed up the home page and the photo cluster has also added freshness to the new look. The white pop-up that displays when a user clicks on a photo has made the photo viewing experience more surreal.

Alright, so now let’s move onto the big ticket item – the ‘Timeline’. Facebook’s new profile layout turns the profile page into an online scrapbook where users can highlight important moments in their life and allows them to pull-up Facebook activity from the past. “Timeline is the story of your life…in a new way to express who you are,” said Zuckerberg while announcing the new feature. The timeline is currently in limited beta mode for developers and is scheduled for public release on the 1st of October. But like all things ‘Tech’ there’s always a way around to get your hands on it before the official release.

At the top of timeline sits a large photo called the cover photo, along with an inset of the user’s profile photo. The user can chose this photo out of their existing photos or they can upload a new one. On the bottom-right corner of the cover photo, the user will find three menu items – Update Info, View Activity and the Settings Cog. The ‘Update Info’ button takes the user to a page where they can edit their basic profile information. The ‘View Activity’ button shows the user a list of all their Facebook activity that’s been organized by year, since the date they joined Facebook. The ‘Settings Cog’ includes a privacy setting that shows the user what their timeline will look like to specific people in their network. To the bottom of the cover photo, the user can see their basic information listed, which includes where they live, where they studied and where they work. Next to it, the user can see a photo montage demonstrating their friends list, another photo showing the number of photos they’ve been tagged in, a map showing all the places where they’ve lived and a list of all the Facebook pages they’ve liked. There is also a down arrow, which when clicked, will show the user any new Open Graph Facebook apps they’ve added to their timeline.

The status bar has improved too. First up is the ‘Work & Education’ button – this lets the user add a job, a graduation, military service or other life events. Next up is the ‘Family & Relationships’ button – here the user can add engagements, marriages, children, pets, and the loss of a loved one or other life events. Living comes next, where the user can add a roommate, add a vehicle they bought, when they moved and bought a home. The next button is ‘Health & Wellness’ which has the option to add broken bones, surgeries, overcame an illness and so on. Finally, there’s the ‘Milestones & Experiences’ button which allows the user to update information such as when they got their license, learned a language, travelled etc. In short if it’s something that the user has done, or experienced, the user will have the opportunity to share it on Facebook.

The entire timeline is represented by an actual timeline on the right hand side of the profile page which lets the user, or anyone visiting their profile, jump to any point in their life to see what they were doing at that time. Needless to say, the objective of this feature isn’t to have five years’ worth of updates about what the user ate for dinner each night or where they partied at and who they partied with.  From the profile page, users can click on a particular year and use the updates to see major milestones in that time period. The timeline organizes the user’s updates in reverse chronological order, based on the content they’ve shared on their profile. The layout is designed as a dual-column view with a large main column for viewing content and a smaller one on the right for fast navigation. The user can choose what’s featured on their timeline. The user can also find out who has unfriended them simply by going to a year, clicking on the total number of friends and wherever it reads ‘Add as Friend’, it means that person has unfriended the user or vise-versa. They can star their favorite updates to double its size or hide it altogether. They can even go back to a certain point in time to add pictures to a particular event or make changes to an update they had made. Here’s a video from Facebook which captures what the Facebook developers had in mind when they created the new timeline.

This is certainly not the last of the changes Facebook is expected to make; there may be more changes that maybe rolled out in the near future. It would also be interesting to wait and see what changes Facebook makes to the pages and how it will affect businesses. A senior leader in the company where I work, once told us, “Organizations die every five years and it’s important that they reinvent themselves every time that happens”.  Change is inevitable – Facebook learned this the hard way. But for now, I think Facebook did good.