We’re all familiar with the term ‘Censorship’, aren’t we? As a teenager, my understanding of this term was a bit different. I thought of it as an evil act, practiced by a bunch of old people, which took away all the fun from watching television. Oh, to be young and innocent…those were the days! As I grew older, I came to understand the various paradoxes and attributes that this term characterized. However, one such paradox or oxymoron if you will, that stood out for me the most was ‘Self-Censorship’. If you’re pondering as to why I choose to call it that, let me draw your attention to how Wikipedia defines these terms.

“Censorship is the suppression of speech or other public communication which may be considered objectionable, harmful, sensitive, or inconvenient to the general body of people as determined by a government, media outlet, or other controlling body.”

“Self-censorship is the act of censoring or classifying one’s own work, out of fear of, or deference to, the sensibilities of others, without overt pressure from any specific party or institution of authority.”

Media and Press agencies have for long been practicing self-censorship, though their motives maybe questionable. Filmmakers abstain from adding certain scenes to their film, which displays good judgment on their part. I’ve had people preaching self-censorship to me all my life, right from my folks to my teachers and even my bosses. But what does it really mean?

I heard Salman Rushdie, renowned novelist of Indian origin, talk about self-censorship at a recent interview. In context of the 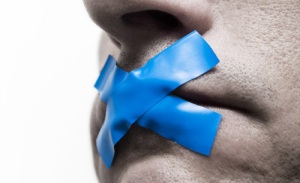 whole Jaipur Literature Festival and the Satanic Verses controversy, the interviewer asked Rushdie if in hindsight he would’ve done things differently and whether he would’ve practiced self-censorship while penning the Satanic Verses. Rushdie replied, saying “Self-censorship would be the death of art”. I haven’t really picked a side in this battle, and hence I may not be able to talk solely ‘for’ or ‘against’ it. But here’s my thought; why does art or literature have to be all about uninhibited self-expression? Would a bit of restrain, in the interest of harmony, hurt? I believe that everybody has their right to freedom of expression, but not to the extent of defaming or obscenely representing a community or their beliefs. I feel that Rushdie could’ve said his story without drawing allusions to Prophet Muhammad or the Holy Quran. Prolific painter, M.F. Husain could’ve still showcased his artistry without painting Hindu deities in sexually suggestive poses.  Having said that, please be rest assured that I’m not taking the side of those goons who choose to wreak havoc under the pretense of being spiritually motivated!

The SOPA – PIPA fallout between US lawmakers and internet giants, which was in the news, was closely followed by a lot of spectators worldwide.  The imminent result of this feud was that these laws were shelved until a consensus could be reached. While back home in India, the government was engaged in a futile effort to thrust it’s prowess upon these internet giants. I’m not sure what the Indian government’s expectations were when they kicked-up this storm, but clearly they had no idea what they were talking about. Pre-screening each internet posting before it gets published, really? What were they thinking! However, this does actuate an interesting debate – Can self-censorship prove to be an underlying solution to address the issues of piracy and objectionable content? Being the optimist that I’m, my opinion is that it can! It’s certainly not a permanent fix to the earlier mentioned issues, nor is it addressing the crux of the problem, but it’s a start. Adopting China-like authoritarian policies is not going to help solve anything, it’ll only make matters worse; remember that it’s human nature to be defiant.

Here’s a clipping of what Google’s CBO had to say on this subject.

Governments and lawmakers aren’t the only ones who’re finding it difficult to enforce restrictions on online content. Organizations around the world are finding themselves in a catch-22 situation. On one hand they want their employees and fans to participate in online conversations about the brand and on the other, they want to moderate what’s being said. The sooner they realize that they are going to have to choose, the better. The key lies in creating cognizance and educating people about the consequences of their actions and the extent of impairment it could cause for the brand. In a world where the line between personal and professional is getting diluted, organizations must take it upon themselves to coach their employees about the merits of self-censorship. How often have we heard stories of people loosing their jobs over an unsolicited comment that they made online, which could’ve been easily averted had they practiced self-censorship. Exactly my point!

Freedom of Expression is a statutory right but he who uses it thoughtfully is wiser than the rest. Whether we choose to accept it or not, our actions don’t affect just us. I apologize for being crude but you’re a hypocrite if you practice self-expression at the cost of offending the community at large. Unlike censorship, self-censorship cannot be imposed; it’s just something you do. Peace.