Community Management (or presence management, like some would call it) is a very fascinating job and a very critical one too, since the community manager is quite often the face of a brand on social media. Everyone knows by now that social media is a very ruthless and unforgiving animal, and that makes a community manager’s job even more challenging. Unlike with the television and print mediums, social media is a perpetually functioning entity and almost everything happens in near real-time. In such a state, it’s quite easy to commit blunders, either due to oversight or mere sloppiness.

The 3 absolute no-no’s for a social media community manager are:

It’s understandable if you want to act like a jerk when you’re trying to keep away trolls from your personal social accounts, but there’s absolutely no room for you to act snobbish and go all Godzilla on customers, regardless of the tantrums they throw your way. Unless….they’re being impossible.

I really do feel for this woman (the customer) because I remember seeing her follow-up response as well and I understand that she’s nearing her 60s. However, if you read this brave COO’s response to her and how he talks about the steps their customer care team had taken to reach out to this woman, you’ll have to grant that the COO was right on his part to post a strongly worded response such as this.

Ryan Clark is the COO of US based Liberty Bottleworks.

The next post is exactly how a community manager isn’t supposed to be responding to a venting customer. All they had to do was post a canned response, something like “We apologize for any inconvenience caused. We will make sure to pass this feedback onto the concerned department.”

Here are few examples of how community managers can woo customers with a bit of flattery and sociability, which apparently goes a long way.

Renault Duster is an SUV sold by Renault India

@emsodo Everyone needs a little retail therapy once in a while. What goodies made their way home with you today?

@ProjectAlmost40 Hmm, tough choice. Both can be styled very differently. We know you’ll pick the right ones!

Nordstrom is a US based upscale fashion retailer

@fashioon_style Aww shucks, your making us blush 😉 Thanks for the love!

@ambroshia01 Nothing but the best for our #BirthdayAngel 😉 Whats on the top of your list?! #LoveList

Victoria’s Secret is the largest American retailer of lingerie

I have been guilty of this myself a couple of times in the past, where I absent-mindedly posted personal tweets from a company account. Needless to say that I was beyond mortified when this happened, but I managed to salvage the situation before it escalated and I was fortunate enough to not get fired over it. But there’s no justifying the laxity on my part and I shouldn’t have gotten away with it as easily as I did. Everyone realizes that a community manager is only human and mistakes happen, but that does not undo the damage it does to the brand’s image.

I’m of the opinion that a community manager should be someone with a few years of experience under their belt and ideally someone who’s level-headed, composed and well-trained to appropriately handle any social media crisis that unfolds. This alone won’t avert slip-ups, but it’s a good place to start. A few thumb rules that every community manager should abide by, in my opinion, are:

Now, a few examples of the saves and misses!

This first post was a good save and many actually bought their story but the follow-up post wasn’t something that was worthy of such a stunt being pulled, was it? You be the judge.

NDTV GoodTimes is a part of the India based NDTV network

Ok, THAT happened. Now that we have your attention, here are 7 ways to make #officefun: http://t.co/Q25blFtJG5 http://t.co/KwwuIOn8SI

The next one is a community manager’s (and PR’s) worst nightmare. Tweeting a graphic image to a customer, a woman no less, is not exactly what you’d expect from a reputed brand like US Airways. What began as a very pleasant conversation with the customer soon turned out to be a PR disaster when this happened. 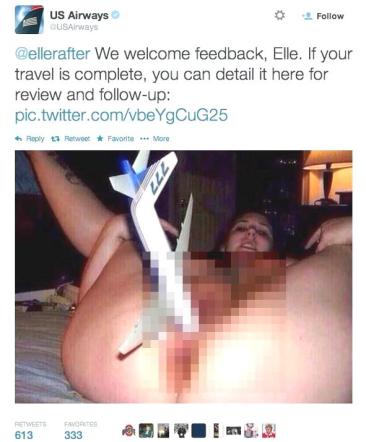 We apologize for an inappropriate image recently shared as a link in one of our responses. We’ve removed the tweet and are investigating. — US Airways (@USAirways) April 14, 2014

US Airways is a major US based airline company

US Airways later revealed that the community manager was trying to flag a pornographic image that was tweeted to them, when the tweets got mixed up.

Pepsi India is the subsidiary of US based PepsiCo, a F&B corporation

Pepsi later claimed that their account was hacked. Now, explain me this – the hacker could have posted about anything under the sun, but they chose to post this?! To add a bit more context, this happened around the time the Supreme Court of India announced its verdict on Section 377 of the Indian Constitution which prohibits homosexuality. I feel Pepsi would’ve done well to own up to the mistake, after all, we were all thinking it!

The next one is from the American Red Cross. Personally, I think this was an honest mistake and I appreciate the community manager’s integrity for owning up to her mistake right away. 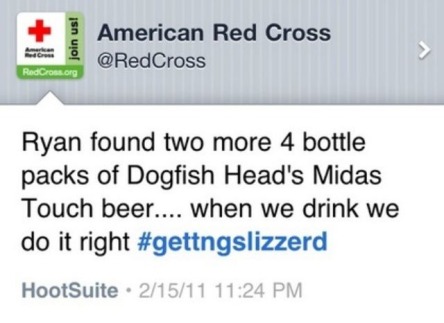 American Red Cross came back with this witty tweet to save the day!

This last one is my favorite and probably the only time when a brand intentionally pulled off a stunt to create awareness about its campaign. This was a part of their #GoTeamUSA campaign, supporting the US contingent at the 2012 London Olympics.

Others tried to piggy-back on this without realizing that it was intentional.

Oops…Sorry for the typos. We were #TweetingWithMittens. Wasn’t it supposed to be colder? Enjoy the game! #GoTeamUSApic.twitter.com/e8GvnTiEGl

J.C. Penney is a popular chain of department stores in the US

The company later confirmed that this was indeed a pre-conceived stunt by their social media team to stand apart from all the other campaigns by different brands, which were running during the Super Bowl.

Accidentally posting derogatory content is one thing but posting insensitive content is something else altogether. There have been many instances where brands have faced backlash from customers after they posted content that was intended to be witty/clever but misfired. Being imprudent can have dire consequences on social media, as the following brands realized.

This was a post made by designer Kenneth Cole, (point to note – sent from his Blackberry) during Egypt’s public protests.

Kenneth Cole is a US based fashion house

He later posted an apology for his tweet. But two years later, he does it again – this time on the Syrian conflict.

“Boots on the ground” or not, let’s not forget about sandals, pumps and loafers. #Footwear

He reportedly acknowledged to a magazine that, his tweet about Cairo was intentional and aimed at creating buzz around his brand.
Not cool Mr. Kenneth. Not cool.

The next one is by Singapore Airlines, who received flak over the order in which they chose to post two tweets relating to the Malaysia Airlines Flight MH17 crash, in crisis-stricken eastern Ukraine. People felt that SA should’ve first posted their condolences and then the tweet about the fact that they’re not using Ukrainian airspace.

Customers may wish to note that Singapore Airlines flights are not using Ukraine airspace.

Our thoughts are with the passengers and crew of #MH17, and their families @MAS

In conclusion, I’d like to leave my fellow social media professionals a tip – If you can spend hours mulling over the contents of an e-mail whose recipient may be either one person or a handful of people, how much time do you think you should devote to a post that will be seen by thousands or even millions? Give that some thought.